Framework is a unified computing architecture encompassing an operating system, API, GUI, applications, interactive programmability, RTOS sensor handling and information management. It is developed and maintained as a semiconductor design with a parallel software version which runs with the help of simulation and virtualization on other operating systems. Framework's design aim is to provide full hardware based computing functionality with no additional software but it does support running x86 programs on an x86 simulator.

While maintaining backward compatibility and following the original design principles of the Ashton-Tate product Framework was rebuilt as an architectural computing concept based on linguistic principles and path based automata. The new architecture overcomes the inherent limitations of parallel processing that the inherently serial CPU-based arithmetic computing imposed. Framework's architectural building blocks are channels that handle its perceptible, inherently selectable and ordered contextual objects. The result is not only an efficiency that cannot be matched in CPU based computing but also a generic highly ergonomic interface which can be internalized with no visual support. Framework employes RAM-based state machines on operating systems such as Windows while taking advantage of massive parallelism on its FPGA based system to provide an instantaneous data handling with Big-O of one. The Big-O of one technology supports SATA based storage available to users as well as Framework's own internal content-based memory and dependency management system. This enables the Framework's inherent parallelism and its extendable interpretation available with the FRED language. Simply put, there is no practical limit on the number of uniquely named FRED functions, nor a delay penalty associated with increase in that number or with an increase in the size of data stored on hard drives.

Framework is maintained in parallel as a RAM based product designed to run on other operating systems and as an ASIC/FPGA SOC IP aimed at peer-to-peer independent malware-immune personal mobile computing. Framework's inherent parallelism permits the use of older radiation-hardened slower semiconductor technologies to provide superior functionality at a much lower cost than current high density technologies. The Framework's architecture make it possible to substitute costly semiconductor density and speed with parallel processing for unrivaled savings in cost and energy. The unique asynchronous delay-path architecture reflects Framework's internal logic and its layout with high level of symmetry (as oppose to sparsity) and a chain like layout (Rent's rule with p=1 per channel).

Framework's unified user interface design principles were established in the early 1980's around the same time or earlier than Apple's integrated GUI, as a software product later marketed by Ashton-Tate. Framework and its built-in FRED interactive interpreter were created by a small team led by Robert Carr who created the Framework architecture with Dave Helms and Chris Kirkpatrick who integrated the FRED language with it. The current architecture extends the original user interface principles to external formats such as multimedia and codecs using new extendable internal modularity. Framework's container frames can be associated with external formats such as raster (pictures) and vector graphics and are subject to the same the user interface and FRED programmability, The FRED language was extended with a 32 bit Windows API interface and can call Windows DLL's functions sending parameters and receiving the returned values. FRED has been kept fully back compatible including LLI (low level interface) applications. The current version of Framework for Windows includes a Windows API Pascal compiler, Framework Pascal (originated as TMT Pascal) which create Windows DLL's and standard Windows API programs that can be called as FRED functions. Framework Pascal supports object oriented programming and include Borland compatible 32 bit OWL Windowing units.

The Framework file system take advantage of a Big-O of one data handling algorithm and direct access to the hardware. It transparently adapt to the host computer operating system file system to provide Framework style desktop cabinets as well as Windows style file dialog boxes which are integrated with the Framework menus and FRED.

Framework is available as software running on x86 computers. It can run from a secure plug-in virtual mobile storage device compatible with any PC.

Framework is a continuation of Ashton-Tate's Framework (Framework, II, III, and IV) and the FRED computer language. The Framework software and trademark were taken over by Selection & Functions Inc. from Borland after Ashton-Tate was taken over by Borland. Selection & Functions Inc. with the stated goal of protecting the significant investment made by Framework users and FRED programmers in this unique technology and concepts. The current Windows versions of Framework which are available to Framework users are fully compatible with the original Framework methods and user interface, files, macros, FRED programs, libraries and dictionaries, while providing transparent compatibility with Windows programs and data.

Copying between Framework and Windows MS Word, Excel, HTML, Internet e-mail, and most other programs preserves text style and format as well as spreadsheet cell and database field values. Images cut by Framework, including pictures opened in Framework (JPG, GIF, BMP, etc.) can be pasted into Windows graphic programs such as MS Paint and Photoshop.

Framework extensive "Windowing" capabilities allows the Framework desktop to grow larger than the Windows screen. A larger than screen desktop can be scrolled up down and left right with documents (which may include pictures) placed freely side by side or overlapped for viewing and comparison. A Framework menu can be toggled between "always on top" keeping the Framework window on top of other Windows or behaving as a normal Windows which can be covered by other Windows when not in focus. program.

A Framework menu creates secondary "view windows" which can be sized, positioned and scrolled as independent Framework desktop viewer windows. They can be updated with changes "broadcasted" from Framework when the Framework desktop is updated. just like the Framework main desktop those multiple "view windows" can be positioned and sized to show "larger than screen" are with documents freely positioned in them and the ability to move them around using the mouse. They can be broadcasted to over the Internet to be shared interactively with individuals or posted on public sites.

Framework's mouse functionality is selection based and time independent. Multiple mouse click operations are deciphered by the number of clicks, not the time interval between them. Mouse clicks actions are user defined and user programmable. They can be directed to run pre-recorded Library macros, standard keyboard keys, and FRED programs as well as Windows API programs. Mouse actions are equivalent to Framework's standard command keys. Mouse-over help tips shows the equivalent key-commands familiar to Framework users.

Framework provides a productivity suite with unlimited expendability, standard organization of data and knowledge in a context based language like programmable environment. Among its features are fast filing, outlining, recording of macros in a consistent predictable environment, user programmability, linking and search tools, dynamic switching between languages, automatic creation of hypertext, automatic database filtering, extensive programming capabilities with access to Windows DLL's and GUI on top of an environment supporting graphics and desktop publishing.

Framework's support for programming ranges from user recorded macros through the FRED language interactive interpreter, to Windows DLL and Windows API programs. For programers (or aspiring thereof) a 32 bit Windows API Pascal compiler compatible with Turbo Pascal is available. And for the time being (while on Intel compatible machines) the LLI DTK (with no exceptions) is a alive and well.

The Framework technology architecture is not tied up to Windows. It consists of OS independent modular cores, including a portable packet data server and modular OS-specific interface. It allows Framework to run via wireless or network connectivity on different platforms. The Framework technology include external file format handlers which can handle other programs file formats in Framework frames applying all the normal Framework features and interface including outlining and free floating to them. Framework to operate remotely on different operating systems via dedicated agents. 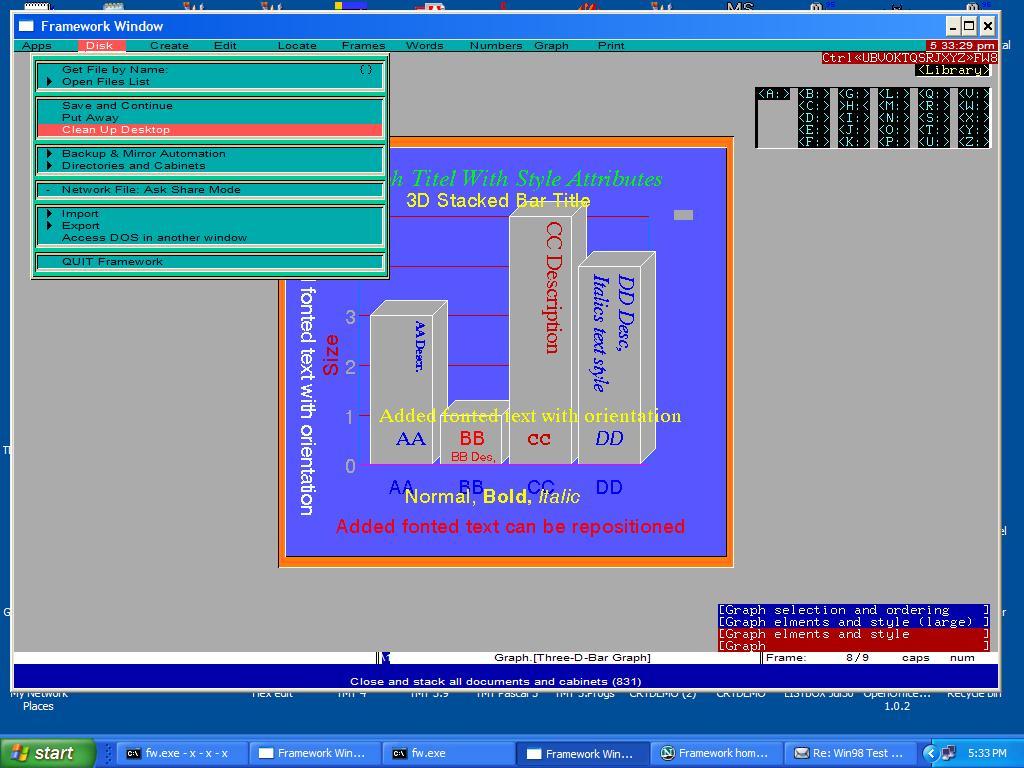 More on Framework's concept, features and look and feel:
Framework's outlined windowing environment with word processing, spreadsheets, databases, file and directory management, data management, integrated hypertext, integrated interpreter, rapid development computer language and a slew of unique features and tools not available in any other software. Framework is unique in its unified context-based object-driven user interface which is based on selection capabilities and set based architecture.

Framework has no speed limit and provides unlimited access to the computer memory (among other things FRED can declare 32 bit arrays). The current versions are typically shipped via the Internet with automatic installation but are also available on a CDROM or a USB device.
Older versions for Windows 95, 98 and ME with long file names are available allowing files written on older versions to be loaded and exchange transparently with newer version that include JPG pictures - Framework running on Windows XP, 2000 and NT. Some version can run on DOS/Windows emulators on Linux, Unix and the Mackintosh.

Current versions of Framework maintains transparent compatibility with previous Framework file format, macro, library and FRED syntax. How compatible is Framework with older versions of Ashton-Tate? Well... a menu choice allow turning of the WYSIWYG off and another menu can turn text mode compatibility on, coloring text style attributes as in the original text mode.


.
Select from the following topics Go to Top of page some of these pages may be accessible via the site map on the left. 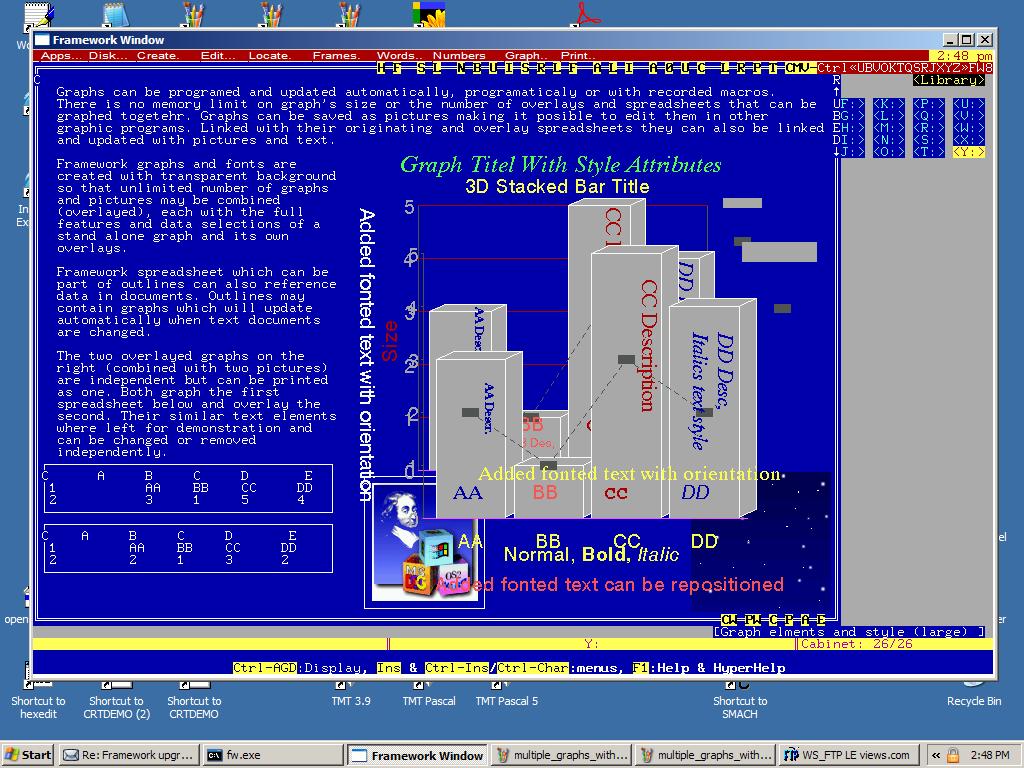 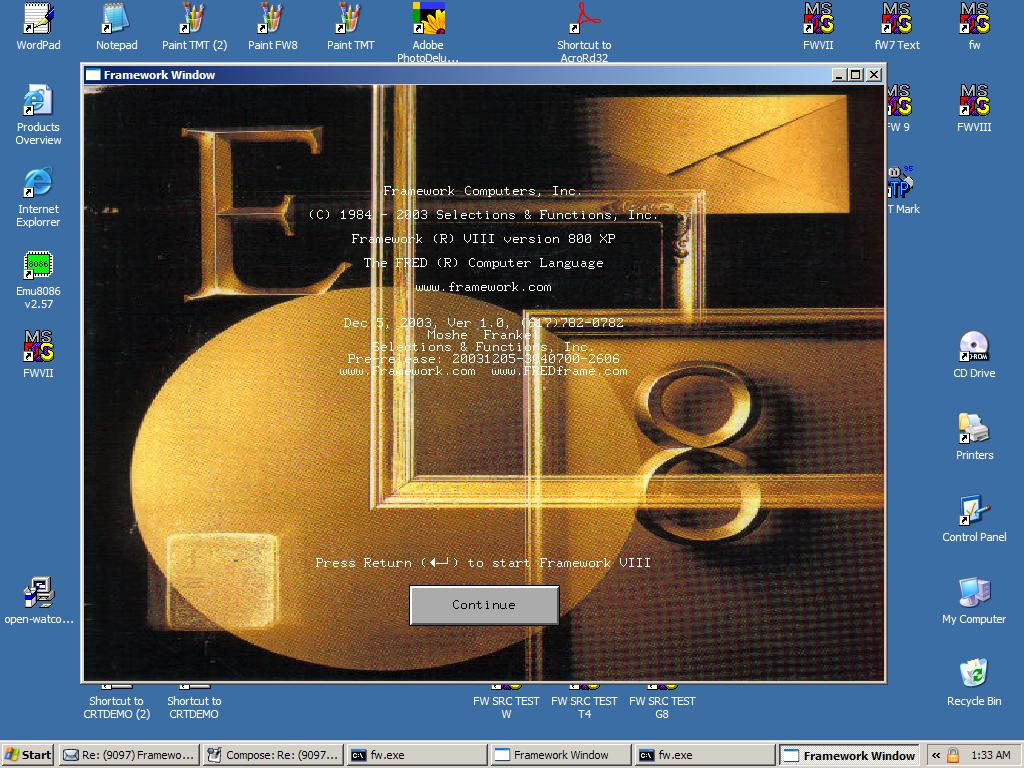 Go to Top of page